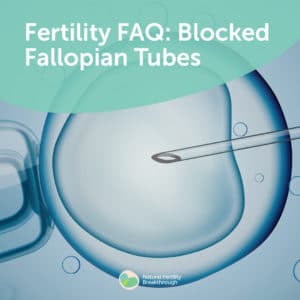 Let’s talk about blocked Fallopian tubes. Now tubes maybe blocked for different reasons. Some reasons are treatable; other reasons are not treatable.

Sometimes mucus gets formed in the fallopian tubes from various reasons really but the majority of it is actually about how much mucus we’re making in our bodies because tubes can sometimes get blocked because of that.

Mucus formation in the fallopian tubes in not a permanent issue. If you have something like a HyCoSy ultrasound – ideally not hysterosalpingogram, which is an HSG, because what it does it x-ray that can increase the negative impact on egg quality – but a HyCoSy ultrasound, uses dye to see the tubes, as a diagnostic but it may also be a treatment in the case of mucus formation in the fallopian tubes because that will help to flush out the tubes.

The key aspect is to figure out why are the tubes blocked. The first step is to actually do a HyCoSy ultrasound because that’s going to help us understand if it’s blocked and what kind of blockage it is.

A hydrosalpinx is where the tube becomes infected and it blows up, it becomes inflamed and sometimes becomes larger but the infection sometimes falls back into the uterine cavity, which negatively impacts the chances of implantation occurring.

In some cases, you actually just have to get the tube removed because the infection is so pervasive, it’s so severe that you just need to remove the fallopian tube, in which case again, with one tube, you are less likely to conceive and again more likely to have success via IVF once you address your minor factors.

Infections will also block tubes but typically those blockages are more permanent. Unless it’s something that will be unblocked by either flushing the tubes through a laparoscopy or HyCoSy ultrasound, I definitely don’t recommend doing any kind of natural treatment that claims to unblock tubes because it does not work and what it will do is it will lengthen your time to pregnancy and sometimes in some cases, decrease your chances of conception altogether because you’ve waited too long for the tubes to unblock.

In the case of blocked fallopian tubes, the best strategy is IVF

IVF was created for that purpose. It’s now used for a whole lot of different reasons but IVF was created to treated blocked fallopian tubes. IVF is not a magic bullet. We found that one of our patients conceived naturally, after treatment with us even after 19 failed IVF cycles.

If you’ve got blocked fallopian tubes and they are decidedly blocked, then yes IVF is absolutely going to be the best strategy because it’s going to enable you to really get past that otherwise definite fertility problem because if the sperm can’t swim through the fallopian tubes, well there is no meeting anywhere so really it’s important to know that.

In all cases, improving egg quality is incredibly relevant and important.

Have you been trying to conceive and/or take a healthy pregnancy to term for over 2 years? Register for a Free Fertility Assessment to discover how we are helping couples worldwide transform their fertility results.