Skip to content
Home » IVF » I have had two failed IUI that resulted in early miscarriage. How can I get the egg, once fertilised to stay put? 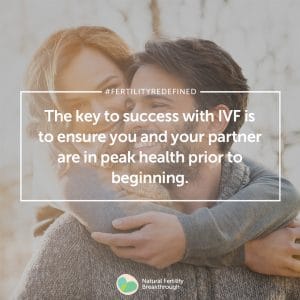 I have had two failed IUI that resulted in early miscarriage. How can I get the egg, once fertilised to stay put?

A: The thing that I can’t emphasise enough and this is one of the most important things that will make all of the difference when we're talking about optimum fertility is that you really will be required to put in the effort in order to get the best possible result.

Are your ready to make that commitment?

I can't emphasise enough, the importance of ensuring that you and your partner are in the absolute best possible state of health or at least working towards it  for at least 120 days prior to commencing either an IVF cycle or trying naturally.

Now, the reason for that is that it takes that amount of time, approximately 120 days for the egg to mature and the sperm to form. Don't think that the egg that you’re ovulating today started being produced in the last two weeks, because it hasn't. The egg in particular, since birth to when each egg actually ovulates it literally takes eight months.

The first initial recruitment phase takes about four months and the second takes about four months. So what happens is that we often kind of misunderstand the fact that, “Okay, well I’m ovulating now. So clearly what I've done in the last months or in this particular cycle is what counts. I’ll just start taking some multi-vitamins and everything is going to be okay.”

It's not that. Unfortunately, it's not going to be okay. Unless you really underlay a very solid structure in order to optimise your chances of conception, you're going to miss a whole variety of things that are going to make a difference, particularly in the sense of success with assisted reproductive methods whether it's IVF, ICSI, IUI, whatever it is.

I often get patients that come in here and then they hurry. They think that because they're over 40, they're in a hurry. They don't have time to prepare. They just want to take the right nutrients and be told what to eat so they can go off and do IVF and have a baby.

Unfortunately, for many of the people that have that kind of mindset and attitude, what ends up happening is that  they're not goingto give themselves enough time consequently the next TCC cycle is not going to work and it negatively impacts their commitment to the preparation process.

Now some couples are great because some couples actually listen. They listen and they go, "You know what. Let me take some time. Let me just step off the rollercoaster. Let me put in place the things that are going to make a difference and then I’ll go to IVF"

I've seen so many couples who, because they were desperate, because their doctors were telling them that they have no time, that they just need to get on with it, they just get desperate and they listen to the advice because they’re being pressured, feeling frustrated and impatient feeling that are compunded when they don’t get the results. It's not until we actually bring everything back down and go, "Right, let's do this right” that they actually end up getting the result that you're looking for.

So don't you fall into that trap - the trap of feeling like you don't have time, when time is exactly what you need to take in order to transform your results, 120 days of putting in place comprehensive advice to ensure that you have the best possible results. I cannot emphasise that enough.

Need personalised advice regarding your specific fertility journey? We specialise in a complete and proven solution for couples who have been trying to conceive or keep a healthy pregnancy to term for over 2 years.
If this is your situation, you may qualify for a free consultation with our team to discuss your specific situation and how we may be able to assist you create your dream of parenthood.
Appointments are limited. Click here to secure your free fertility assessment.

Home » IVF » I have had two failed IUI that resulted in early miscarriage. How can I get the egg, once fertilised to stay put?