Skip to content
Home » Male Fertility » My husband can’t quit smoking. How can I convince him to stop?

My husband can’t quit smoking. How can I convince him to stop?

y husband can’t quit smoking. How can I convince him to stop? I had two miscarriages both in the first trimester. We always wanted to have a baby.

A: Sometimes we come across couples who are having difficulty trying to conceive and also are stuck in a situation like this where they don’t really want to make the effort required in order to actually get the results. It’s not that he can’t quit smoking. It’s obviously he doesn’t see the benefit of quitting smoking and perhaps he sees himself as removed from the outcome of having a baby.

There’s a little bit of a difference when a couple is together on the same page 10/10 wanting to have a baby and when one is 10/10 and the other is less than 5/10 because then the other partner really doesn’t necessarily pull their weight about what needs to happen.

Men especially, sometimes they don’t see themselves as actually being part of that equation. However, may I remind men and women that a baby is a big fertility equation that no matter how fantastic egg quality, if the sperm is not as healthy as it can possibly be, we still don’t necessarily get the outcome that we want, which is a healthy baby at the end of a healthy pregnancy.

Really, it’s about understanding and helping him understand his impact and certainly his role in the whole situation. I have seen many times couples who are struggling to make lifestyle changes because they don’t understand clearly enough the impact of those changes and what it’s going to do for their fertility.

I mean obviously for us, it’s very easy to recommend these changes because we have been able to see it across the board over thousands of people, so we know that it makes a huge difference, we know that the outcome can be very much dictated by what choices we make in a day-to-day basis.

It’s about again connecting to the big “whys.” 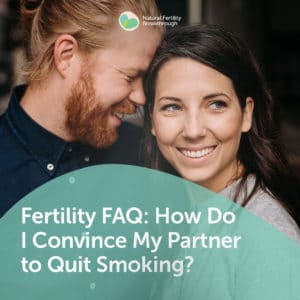 What is it that having a baby is going to give him that he doesn’t already have, help him connect with the big reasons as to why he’d really want to have a baby, why he’d really want to actually do the very best that he could in favour of that child, that prospective child. Also somehow I find giving them a little bit of extra education can be really useful in the sense that giving them a bit of extra support in the form of data and statistics. Men often respond very well.

It’s really quite important to do some of your own research and perhaps talk to a doctor who is going to have your view and certainly the view of the broader scientific community when it comes to smoking and infertility. Perhaps take him to one of those doctors and let the doctor tell him how bad it is that he is smoking and the impact on miscarriage.

We know for a fact there is an impact of smoking on sperm quality, which therefore impacts the risk of miscarriage. We know that it’s going to be an issue and sometimes having him be explained that by somebody in a place of authority, I guess, is going to be much better than his wife telling him what to do.

I know personally whenever I wanted my husband to listen to me on a health matter, I don’t actually try to educate him myself. I take him to see someone who’s going to tell him exactly what I was trying to put to him and what I’m trying to get him to understand, getting somebody else in the place of authority to tell him is probably going to be your very best bet.

I think that trying to educate him as best as you can by using different means is probably going to be your very best bet, and also support him. There are so many different tools and techniques these days that help people who want to quit smoking. In terms of education, I also recommend participating in our free #FertilityChallenge which can be a real eye opener.