Skip to content
Home » ovulation » Trying To Conceive: How Often Should I Have Intercourse?

Trying To Conceive: How Often Should I Have Intercourse? 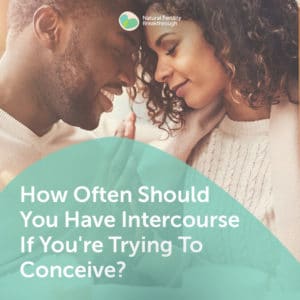 If you are trying to conceive, how often should you have intercourse?

Probably the men don’t worry about it too much, essentially the key that we need to focus on here is to be having intercourse around the mid-cycle and that will depend for each woman because essentially different women ovulate at different times.

Every time that I got pregnant with my first son and my second son, I ovulated up to day 30 in my cycle. Like I said before I have polycystic ovarian syndrome, so my cycles are very, very irregular, but I knew that in that irregularity, there was a pattern. And so, I started to understand my body in the best possible way that I could to really think about what is the pattern that my body is trying to show me and therefore when is it that I actually need to attempt conception in order to be successful.

As it happened, obviously I had to put a lot of work into getting my cycles into at least some kind of pattern because they used to be extremely irregular to the point that sometimes I would go 6 months without having a period; other times, I would have a perfect 28-day cycle. That was a huge variation between what would happen from 1 month to another. I had to put in a lot of work to actually balance and regulate all of that, which obviously I did once I had an understanding of what my patterns were like.

I was able to actually see it in great detail because I was charting my cycles and I used to chart my basal body temperatures and really be quite aware of what my body was doing even before I actually ever started trying to conceive and I did it for many, many years. In fact, I actually used to use my charting as a way  to ensure that I wasn’t going to fall pregnant. I’ve never really used the pill as a contraceptive. I always used to use body basal temperatures and fertile signs.

Literally when I decided to try to conceive the first time around after I had done all of my contraception preparation, I was able to conceive first try because I understood what was actually happening within my body. Then my second pregnancy, I had to do a lot more work in getting my cycles to be regular again. But again, once it did happen and we started trying, we were able to then conceive quite quickly as well.

The reality is that in order to be able to conceive, you really don’t need to have that much sex. You just need to pinpoint it correctly.

I’ve known couples who basically used to have sex every single day throughout the month, sometimes twice a day and that didn’t get them results that they necessarily wanted. But after putting in place the recommendations that we gave them and the things that they needed to do, then of course it made a lot more sense for them to be able to understand when they’re ovulating, when the best kind of fertile window was happening to them. That really is the key in many instances.

As far as timing, timing is going to be everything. It’s not necessarily about frequency or even what time of day. Even though sometimes of course that can have an impact, but really most of the time, it’s about understanding on a broad level what is your kind of variation of timing, when is your body most likely to be fertile. The more that you chart the cycles and understand what’s happening through your basal body temperatures, the easier the process will become in really understanding when you should be trying to conceive. 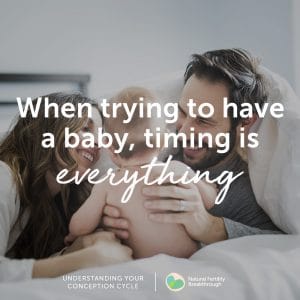 When a couple begins their mid-cycle peak of ovulation, I recommend trying to conceive every second day and once a day is perfectly fine. But you really want to be guided also by mucus changes, so you want to be guided by what your basal body temperatures are telling you retrospectively but also by mucus changes. Those are the things that are going to be most important.

Once you know that your mucus is peaking, that it’s fertile, that it’s very stretchy, and that it has that kind of fertile conditions to it, then you know great, this is when I’m going to become infertile. Generally speaking, mucus will peak 1 to 2 days prior to ovulation occurring, so if you know that that’s the case and if you know your particular pattern, when that mucus peaks, you know, “Okay, now this is the time to start trying to conceive.”

Now obviously PCOS for example, it can be tricky because the body can go through several attempts of ovulation and you generally will get a lot of stretchy mucus at different times of the month, which can be a little bit confusing. Then you’re unsure unless you’re charting your temperatures whether you have ovulated or not because even those predictive kits, you know the LH measuring kit, even they can be a bit off from time to time. Depending on where you are in your cycle, they won’t necessarily work.

And so, I find the easiest and most effective way of pinpointing ovulation and actually being able to figure out what’s going on is a combination of fertile signs, charting, and basal body temperature charting.

Yes, it is a slow process. Yes, it takes a couple of months for you to get the hang of it. Yes, it can be a little bit off. I charted my cycles for over 10 years without it ever really bothering me – by the way, after a while, you start to just get so clear about what your body is doing that you don’t even need to chart anymore and you kind of know.  Some days, you probably just need to confirm whether you have ovulated or not, I would just check my temperature for a couple of days in a row and just figure it out and then I wouldn’t need to chart anymore.

That truly is something that is very useful once you actually get the hang of it provided you look at it from the perspective of  “I’m gathering information about my body, I want to know as best as I can what it is that I can do in order to optimize it” then that’s the best way to approach it.

The one thing that you want to really make sure of is that that your partner doesn’t pull out the penis too quickly after ejaculation. You want the penis to be flaccid before it’s pulled out of the vaginal cavity because otherwise, it can create a vacuum that sucks out all of the sperm. It’s always ideal for female orgasm to happen around about the same time or just after male orgasm.

Time of day – whenever you feel like it, really.

The Understanding Your Conception Cycle, three week program, is available to couples all over the world as a fully personalized, online program, personally delivered by fertility specialist Gabriela Rosa.  The mode of delivery includes workshop style webinar, transcript and Facebook Live sessions in a dedicated group, where you will have direct access to Gabriela to address your questions and get the answers you need to better understand your conception cycle and window of fertility.