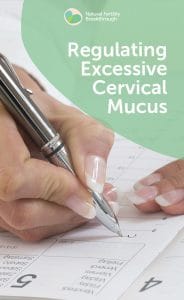 “What do you suggest for regulating excessive cervical mucus that occurs month long? It does change to indicate ovulation, but there is never a dry day.”

Great question, because even today many women don’t really know what is normal as far as their own vaginas are concerned.  There are couple of really important things to remember…

I detail cervical mucus stages in another post so generally what happens; you have your periods, then a couple of days after your period, if you’re not having any spotting you’re pretty much dry, then literally it starts to become wet and quite moist again.

You have very fertile, very wet, very stringy mucus that’s very stretchy about 1 to 2 days prior to ovulation and then after ovulation things become, still not completely dry but it becomes drier than they have certainly been in that first part of the cycle, in the first 14 days.

So it’s important to know that lubrication and certainly some discharge is going to occur and most women will have some discharge in their underpants pretty much on a daily basis and again, that’s not actually abnormal for the most part.

However, excessive cervical mucus secretions and/or discoloured or textured or even strange smelling discharge must be investigated further.

It’s really important to note that discolouration is really anything that differs from your usual. It might be white, it might be green or yellow essentially a change from what’s normal for you, is important to investigate. That’s something that your GP essentially can do for you.

Again I’ve detailed factors that may influence the quality and quantity of cervical mucus you produce, that can impact not only your chart interpretation but also your fertility in another post so here I’ll stick to what to do when vaginal secretions go wrong. If your cervical mucus seems abnormal the first thing to do is to get a diagnosis, in order to make sure that you are dealing with the right thing.

Generally a vaginal swab is the best way of understanding what is happening to vaginal secretions, whether there are any infections or any micro organisms that are actually playing a role in that situation.

Generally though, when you go to a GP and say that you’re having strange vaginal discharge, they often prescribe things for you depending on what you’re explaining the discharge is like. As a fertility specialist it is my recommendation never  take anything that your GP prescribes without first getting your vaginal swab done.

The reason for that is that there are many and various different types of micro organisms that can create vaginal discharge, that will cause different issues and which require different types of medications in order to actually create the result that you’re wanting, which is a healthy vagina.

If the discharge is normal and nothing comes up after you get a diagnosis, then you might want to just take some probiotics, just to be sure that you’ve got the right type of bacteria that’s going to help with ensuring good bacteria in the vaginal canal.

You need to be really clear about with your GP that sometimes one particular type of vaginal swab is not going to be enough in order to get a diagnosis. There are bacterial swabs that you can get done, but then there are cultures that sometimes needed to be done to diagnose other issues that could be playing a part in creating discharge.

Mycoplasma and Ureaplasma are some of the micro organisms that can often cause silent infections that can  cause discharge that can indicate fertility problems or even miscarriage – these need to be addressed.

So those are the types of things that you really need to discuss with your GP in detail because sometimes GPs will just do one particular swab and they’re not going to really comprehensively test what’s going on. Not all vaginal swabs are the same, so don’t think that because they’ve taken one swab that they’ve actually done everything. 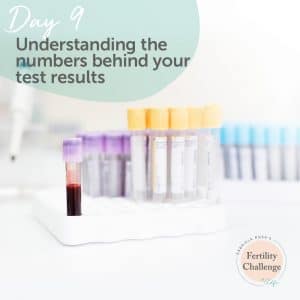 Also it’s very, very important to get some further diagnosis in regards to sexually transmitted infections. Generally, these are done via blood test and they often are also silent infections. Other than a kind of a nothingness discharge, nothing much else happens overtly, but for example

There are at least 50 parameters or tests that may need to be performed for a couple experiencing fertility problems in order to rule out possible reasons or cause for infertility. Click the following link for more information on fertility testing and understanding your results.

Posted in Women's Health and Fertility