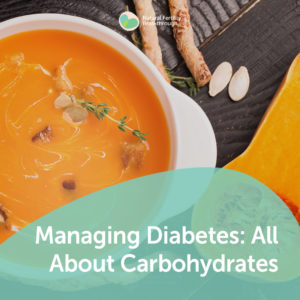 What to do about carbohydrates in your diet because when it comes to diabetes management, there is much controversy around the low carb diet.

Many diabetes authorities have been advocating high levels of carbohydrate as a standard approach for all diabetics. Our recommendation however, differs for a few reasons…

Firstly, having 50 to 60 g of carbohydrate per meal as is often  recommended, which means that you’re giving yourself a very large dose of insulin.

50 to 60 g of carbs is about 3 to 4 slices of bread or a bowl of pasta or a bowl of rice. Not too much in terms of visual, but in terms of carbohydrate it’s quite substantial. And there are few issues with it…

One is that when you have that much carbohydrate it makes it incredibly hard to manage your sugar level. It’s not easy to calculate the carbohydrate content of food or the affect it will have on your sugar level when there are large amounts of it. Knowing your insulin to carb ratio becomes very tough. It means that you’re likely to give yourself too much insulin or not enough, which is likely to be a problem regardless of whether you were taking insulin or not.

The result of giving yourself too much insulin are also the result of the pancreas spitting out a heap of insulin to manage the carbohydrates you eat. Too much insulin will result in a low blood sugar level – whether you’re diabetic or  non-diabetic – and that can leave you feeling tired, lethargic, unfocused, sweaty, uneasy and makes it difficult to operate. It also means when your sugar levels plummet that you start craving another sugar hit and a vicious cycle is triggered.

On the flip side, not enough insulin means you would have high blood sugar. This would be the same scenario in prediabetes, the pancreas is in burn out mode, having trouble producing enough insulin to cover the carbohydrate load you’ve just eaten. This can also make you feel fatigued, unhappy and searching for another energy hit, often in the form of food. It is also what. High blood sugar also increases the likelihood of complications over the long term – chronic high sugar levels, damage to blood vessels and cell integrity, and oxidation which leads to Heme disease, Retinopathy and cardiovascular disease.

Eating large quantities of carbohydrates makes it easy to crave more of the same. You become used to sugary, carbohydrate rich food and life becomes all about searching for the next carb fix. So what’s the solution?

I’m not recommending that you rule out carbohydrates. In fact, I think it’s difficult to stick to a diet of less than 40 to 50 g of carbohydrate a day, especially if you are keeping active. 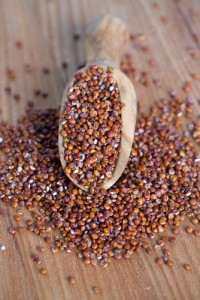 An approach we know that works is having about 20 g of carbohydrate with each meal.

This amount of carbohydrate seems to optimize insulin requirements and provide you with enough carbohydrate to sustain and satiate you and is not enough to raise sugar levels to unmanageable levels. It also seems to be the amount at which glucagon is not as often released. So there are no surprise spikes in blood sugar levels overnight. So what does the magic 20 carbohydrate number looks like? 20 g of carbohydrate is equivalent to about:-

This amount of carbon carbohydrate ensures that you also avoid the buffet restaurant effect.

The other point that I must mention here is that whilst the quantity of carb is important, the type is also incredibly important. The sticking to legumes, whole grains such as quinoa, millet, brown rice is actually the key. Fine white grains, cereals and bread, even if they are gluten-free and even if they do fall within the 20 g of carbohydrate will still make it difficult for you to get your blood sugar levels stable and your insulin resistance down.