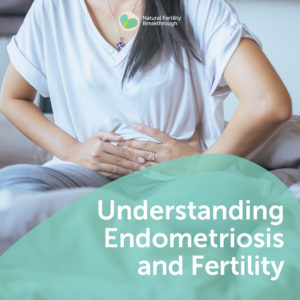 We’re still really unsure about what brings it on as such, but we do know that it can decrease the quality of the egg. It can decrease the chances of a healthy conception. Of course, it’s characterized by retrograde blood flow, so blood flow that instead of coming out through the vagina generally during your period will go back into the uterine cavity, and it causes a lot of inflammation and also it can cause adhesions in that area.

The adhesions are going to be most problematic because it can cause pain. If there are glued pieces of organs or tissue around different parts of the pelvic cavity, it can cause pain when there are small micro-tears around that same region. But the other thing that can often happen is that we can also have fallopian tubes get blocked through, which of course, if the fallopian tubes are blocked, then it’s very difficult if not impossible for the sperm to swim through to the egg and affect conception.

We know that endometriomas, which are endometriosis almost kind of cysts, some call them tumors, although I wouldn’t go as strongly as calling them a tumor. It’s a cyst that is found in – it’s the same principle of endometriosis, but it’s found inside the actual ovaries. We know that that really does cause a problem for the quality of the eggs. That’s why endometriosis is going to be problematic.

As far as ways of addressing it, yes there are certain ways of addressing the causes, and the things that we would need to be looking at as far as how to address endometriosis for a woman is that like I said before, there are lots of different areas that we would want to be looking at. Some of those areas include we do want to be looking at it from an autoimmune perspective because it can have a part to play. Autoimmunity can have a part to play in the development and the I guess lack of resolution that one gets with endometriosis.

The other aspect is that there are genetic factors at play. There are more inflammatory factors at play, so we do want to address inflammation overall because that would definitely make a difference. We also want to make sure the body is being supported and it’s supported as it possibly can be to be in optimum fertility because when that happens, then we know that at least we are optimizing the chances that we have of a healthy egg being developed and therefore conception occurring and also keeping a healthy pregnancy to term.

We also know that endometriosis generally is related to whether particularly the egg situation, whether hormonal imbalances cause endometriosis or caused by endometriosis is also the question in regards to this. Irrespective again, inflammation comes back to the fore because hormonal imbalance will also increase that inflammatory response that will exacerbate the development and I guess the spreading of the condition.

For some women, basically there is a grading of endometriosis, so it can be very, very severe which would be a grade 4, and a grade 1 would be mild. For some women, it will develop into a grade 4; for other women who have grade 1, it doesn’t progress too far.

We know that environmental factors also do play a huge role. As far as environmental factors are concerned, we are talking about chemicals. In our personal environment, there are lots of different types of cosmetics and even things that we don’t even realize that we put on our skin will have an endocrine-disrupting effect, which again will exacerbate endometriosis formation and development.

I see my patients talking about this all the time even when they don’t really realize that this is what’s keeping them away from creating the healthy baby of their dreams. It’s really much easier done when we try as best as we can to really get clear and get clarity around what actually is getting in the way of your particular situation. Because once you actually identified those minor factors, those little things that can play a role, then it’s a lot easier to start making a difference towards them and actually being able to make the difference and get the result that you are looking for.

Whenever I talk about minor factors, sometimes people don’t understand just quite the impact of those factors and the impact of lots of little things on the overall grand scheme of what you’re trying to achieve. There is a fertility model process that was developed in medicine for understanding timing to pregnancy of people who are affected by a whole lot of little things that get in the way.

All of those things on their own, they might not necessarily be a big deal or be a deal breaker, but what can happen is that as a combination of all of those things, they really can make a huge impact on the body’s ability to deliver the ultimate result that you are looking for.

This is not a model. This is actually a research-based model that is not a model that I have created. It’s validated in scientific research and scientific literature, and we know that that’s pretty much how it plays out across the board on a global scale. That will impact fertility into this, and you are kind of thinking, “Well, you know how come that this hasn’t really happened, happening yet for me? Why am I not pregnant yet?”