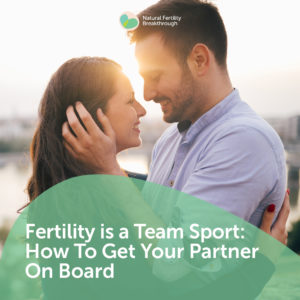 Strategies please on how to get your partner onboard without sounding like a nag and wanting to slap him upside the head because you have been telling him the same old S-H-I-T for years: alcohol plus sperm don’t mix.

A: Great question because it can be applied to so many different ways of addressing partners in general, not just husbands but sometimes wives, too. I have had not very many but over my years, I have had some husbands that were just as diligent as any woman out there who is desperate to have a baby and wives who are just like, ‘Oh, why do we have to do this shit anyway?’ So we can’t generalize, right?

However, I have to agree that sometimes the gents take a little bit longer on the understanding train. It’s not because they don’t want to help. It’s not because they don’t want to be of service. You’ll find that most trying to conceive will definitely want to be of great service. However, what happens is that they have a different idea about what it takes to “be of service”.

Fertility is a team sport. Ultimately what needs to happen is we need to increase our reasons as to why this is important for your husband. Instead of batting him up upside of the head, what you could do – as I said – get him to watch all of the videos, get him to participate, and also ask him really good questions, cute things like, “Tell me, on a 0 to 10 scale, how much do you really want to have a baby?” Let him answer it. When he answers it, you will know. You will also be able to ask him if it’s not a 10/10, “Okay so, what would make it a 10/10 for you?”

But you know what, I would so much rather know that I have given it my absolute all, that I have exhausted every possibility, that I have done everything that I needed and it didn’t work than living with the regret and the thought of “What if I had done what I needed to do, what if I had tried? What would it look like? How would my life change?

Because sometimes the men, they’re traumatized by our crazy behaviour, by our unstable at times venting of emotions. Most men can’t cope with a woman being hysterical and venting and doing all the things that it is that sometimes women do when they feel devastated, like crying in a fetal position on the floor because they want something and it’s not happening.

Now you’re not helping your partner be excited and onboard 10/10 by behaving like that. It’s okay that it’s going to be sad with every negative pregnancy test. However, sometimes we need to actually be able to understand that yes it’s okay to feel that and it’s not okay to put that on to somebody else.

I think that men fear that the most. They feel being impotent, not actually physically impotent, actually not being able to have an erection, but they fear not being able to deal with having to pick up the pieces of you being on the ground in fetal position for days because you don’t have what it is that you want.

Try offering him or her the assurance that, “You know what, I want us to do this together, I want us to be a team on this, and I promise you that if it doesn’t happen, I’m going to continue to be a whole person,” I think that they’re much more likely to engage in the process.

Certainly one of the biggest reasons I hear as to why men don’t join fully their women on this path is because they’re afraid of what it’s going to mean if it fails. If it fails, at least you know that you’ve given your absolute all and you can be happy in the knowledge that you have done your very best.

Plus in this day and age, if you want a baby, you will have one. There’s donor egg, donor sperm, donor embryo. There are so many ways. There’s fostering. It’s really more a matter of sometimes getting accustomed and perhaps becoming flexible that the way that you imagined it was going to happen needs to be adjusted slightly.

I know that for some couples that’s possible and for others, it’s just not. That’s okay. If you’re one of those couples that it’s not, then if you exhaust every possibility and nothing works then you need to figure out an alternative means to how you’re going to spend your time, energy and effort.

In fact, Allie who is one of the moderators, she would tell you, the number one thing that I told her when she came to see me was, “Allie, here’s the thing and this is what we’re going to do,” and I do say this to a lot of my patients. “We are going to do our utmost. We are going to do absolutely everything we can to help you create a healthy baby. Before we do that, I want you to completely forget, completely let go of the need for a particular outcome.

I know how hard that is. I know that it sounds a little bit paradoxical, but trust me it works. It really does work. The more that you practice just releasing yourself from being focused on and obsessed with a particular outcome, the easier things actually are.

Home » Mind and Body » Philosophy | Mind & Body » Get Your Partner Onboard